A CONDENSED HISTORY OF FIRST BAPTIST CHURCH OF BLUE HILL

Baptists first appeared in America in 1631 when Roger Williams came to what is now Massachusetts. For their first one hundred and seventy years, the colonies, with the exception of Rhode Island, did not allow religious freedom, and not until the middle 1800’s was taxation for the purpose of support of designated denominations entirely eliminated. With the ratification of the Bill of Rights in 1791, Baptists and other non-conformists were protected by law to openly practice their faith. This brought an era of evangelism and church growth among the more than 150,000 people who populated Maine. 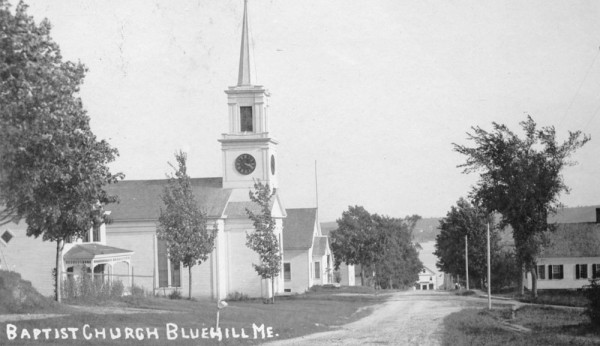 The first leaders of the Church were Isaiah Hinckley and John Roundy, who were appointed as Deacons. Jeremiah Stover was named Clerk. Amos Allen and John Roundy were licensed to preach in 1807, and Roundy seems to have been Pastor until 1821.

The church met in homes during its early years or, when possible, gathered in a schoolhouse. In the spring of 1816, members and friends went into the woods and hewed the frame for a new structure to stand “at the head of the bay” on the east side of the road between the houses of Isaac and Daniel Osgood (its present location). The building was dedicated in February of 1818, but not completed until 1827.

Between 1855 and 1856, under the direction of Thomas Lord, a retired ship’s carpenter, the nearly forty-year-old “meeting house” was transformed into a sacred edifice with the installation of ornate woodwork, traditional white “sheep pen” pews (replaced in 1928 with today’s oak pews) and changing the window openings to the present four two-story openings. The bell, bought by the women of the church, weighs more than half a tone and was installed in the steeple in 1858. The pipe organ was acquired around 1860, when it was noted to be “lying in Captain Hopkins’ store.” The clock in the steeple was given to the Town of Blue Hill be Dr. Alex Fulton in 1883. In later years, the clock was gifted to the church. 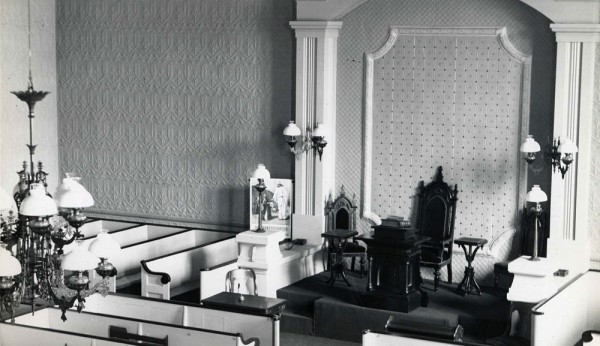 The church’s first parsonage came about in 1830-32 and was located some distance from the church. The present parsonage was built in 1892 at a cost of $2,200. The chapel was built in 1880 for $1,200. The women of the congregation played a vital role in making both structures and their contents free and clear.
The church’s “golden years” – the 1840’s – coincided with an economic boom in Blue Hill brought on by ship building and the long-term ministry of James Gilpatrick. Elder Gilpatrick served the church from 1828 to 1846.

Although the Civil War marked the demise of Blue Hill’s economic prosperity, it ushered in the acknowledged role of women in the church. In the earliest days of the congregation, women were listed as members but otherwise were not mentioned. We can only assume they were active in such church endeavors as social functions and visitation of the sick and bereaved. The first written reference to a “Ladies Circle” appeared in 1862, when the treasurer of the Circle paid the church $31.87 – a sizable amount at the time.

After the Chapel was built in 1880, suppers were served there. Admission for a baked bean meal was ten cents. Historian Esther Wood said, “I hasten to assure you that the Blue Hill ladies of [the late 1800’s] had more than baked beans up their culinary sleeves. Once a year, on two successive nights … a sale and a fifty-cent supper brought loads of buckboard customers from as far away as Ellsworth. Ham, chicken, turkey, cream puffs, tarts, pies, and even steeple cakes (tall cakes frosted so they shone as symbols of the Celestial City) were featured.” In the twentieth century, women’s work became more formal and its focus changed from handwork and food to missions and personal devotion.

While intentional programs for men and women have all but passed from the scene, ministries for children and youth continue to thrive. Though begun as basic education for children working in sweat shops in the inner city of London, England at the dawn of the nineteenth century, Sunday school quickly developed in American free churches as an alternative to catechism. The church has been particularly blessed by the outstanding leaders and teachers of faith education. Throughout the twentieth century, Vacation Bible Schools have been conducted, frequently in cooperation with neighboring Baptist churches and, at times, with the Congregational Church. Over the years, age-specific activities for teenagers have been increasingly popular in the church, along with Region and Association camping. Mission trips and ecumenical youth gatherings hold the promise of becoming annual events.

Neither time nor space will allow for the naming of the hundreds of saints who have faithfully and humbly served the Lord over the history of the First Baptist Church of Blue Hill. Literally thousands of people have come under its influence and benefited from its ministries. With the apostle Paul, we can only say, “I thank my God upon every remembrance of you, always offering prayer with joy in my every prayer for you, in view of your participation in the Gospel from the first day until now. For I am confident of this: that He Who began a good work in you will perfect it until the Day of Jesus Christ!” [Philippians 1:3]